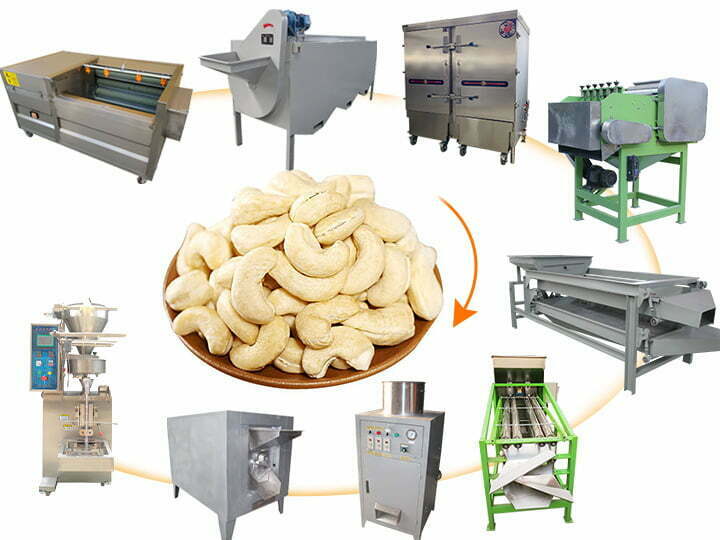 Cashew nut is rich in nutritional value and is one of the world’s four major dried fruit. It can be processed into many flavors of cashew. The small cashew processing line is a series of equipment specially designed for processing cashew nuts with semi-automatic machines. It will get the peeled cashew nuts after processing. All cashew nut processing machines are designed to replace manual labor according to the requirements of the food processing industry. This semi-automatic cashew nut production line is easy to operate and can avoid environmental pollution. It is fully in line with food processing standards with low energy consumption and high efficiency.

This is the first step in the cashew nut processing plant. Put the raw material into the hopper, and the hoist delivers the material to the cashew nut grading machine for nut grading. It will reduce manpower input and more efficiently. The motor adopts a speed regulation motor. You can adjust the speed of the hoist according to actual needs.

It is a very important step in the cashew nut peeling processing line. Put the raw cashew nut into the grading inlet. Adjust the hopper quantitative gate to control the feed amount of raw materials. Raw material falls into the sieve. Grading the cashew nut in the rotation of different aperture screens. Due to the size of the cashew is different, so it will improve the cashew integrity when shelling after grading. Generally, it can divide cashews into 3 – 5 levels( or customize according to customer’s requirements). The level is divided into four according to the cashew width: under 20 mm, 20–23 mm, 23–26 mm, more than 26 mm. This machine composes a transmission structure, hierarchical structure, frame, and other parts.

First, fill the water tank to preheat. After the water in the water tank boils to produce steam, disconnect the power supply. Then slowly open the door lock to reduce the high-temperature steam in the rice cooker. Then open the door, close the door and lock the food to steam, and continue heating.

Connect the steam source to the “steam input port”. Slowly open the steam valve and observe if the pressure in the pressure gauge meets the requirements. Ensure that the input steam pressure does not exceed 0.02MPA. Start to preheat, preparing steamed food after the steam is discharged. Close the steam valve and slowly opens the door lock before putting food into it. After releasing the high-temperature steam in the rice cooker, open the door and put in the food to steam.

This machine is one of the key steps in the small cashew nut processing plant. To get the ideal shelling effect, it needs to grade the cashews first. When cracking the shell, needs the same size cashew nuts. It can adjust the gap of the feed hopper to a certain range. You can adjust the height of the blade according to the cracking situation.

After cracking the cashew nut shells, it needs a shell kernel screening machine to separate the cashew nut shells and kernels. This can reduce manual labor and increase production efficiency. The machine has the characteristics of low energy consumption, high output, simple structure, and convenient maintenance.

It is easier to peel cashew nuts after drying, so in order to get a higher peeling rate, needs a cashew nut dryer to dry cashew nuts.

When the wind is blown out by the circulating fan, it passes through the air duct and encounters the radiating pipe. Then the hot gas heats the cold air., and the hot gas heats the raw material. After heating, material moisture will evaporate due to heat. Then the gas containing a certain amount of water is brought back by the circulation fan and then repeat the work. But some of the water will be automatically drained through the drain. This recycling work to achieve the purpose and requirements of drying. The temperature of the dried cashew nuts is about 80 degrees Celsius, and it takes about 3 hours at a time.

The peeling machine is generally equipped with an air compressor. Use the thermo-pneumatic principle to remove and separate the cashew skin. No damage to cashew nuts. It has the characteristics of time-saving, labor-saving, and high efficiency. Dry peeling has no pollution to the environment. The peeling rate is 95-98%. It does not rust and meets the requirements of the food industry.

You can adjust the gap between the rollers according to the size of the cashew nut. The machine mainly uses different sizes of meshes at different levels to classify cashew nuts of different sizes. The largest cashew kernels are separated from the first level, while the smallest cashew kernels are sieved from the last level. Adjust the clearance by loosening the bolts on both ends of the roller shaft. Nuts evenly enter the roller. Adjusting the vibration amplitude of the material placing the machine in the controller of the stepped electric control box. Vibration amplitude becomes larger when clockwise, and the vibration amplitude becomes smaller when counterclockwise.

The cashew nut processing line already has a very mature technology. The cashew peeling line is the first step for the deep processing of cashew nuts. We can customize the machine according to the specific requirements of customers. The production line has high production efficiency. Peeled cashews can be further processed into various foods. Cashew food has good prospects in the food industry with fast recycling and high returns, which are worth investing in.