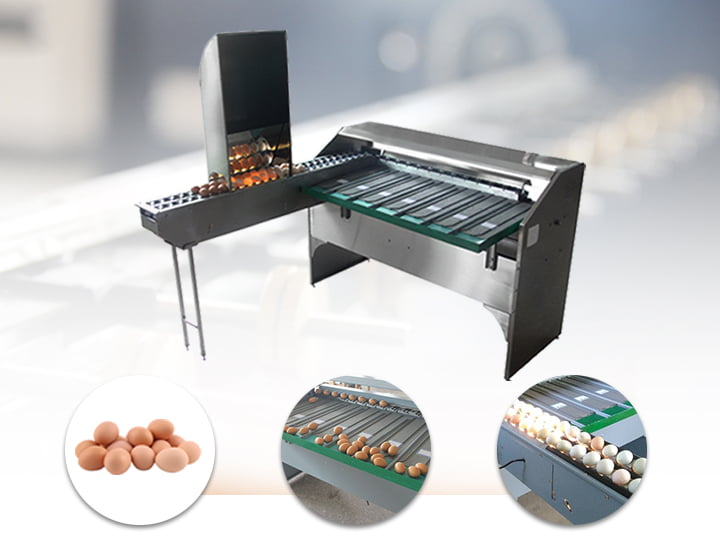 The automatic egg grading machine is also called egg sorting equipment, it adopts the egg weight to realize automatic sorting. According to different grading requirements, the egg grader can divide the eggs into 5 and 7 levels. The grading interval is customized according to customer needs. The small egg sorting machines have both stainless steel models and carbon steel models. It has the functions of automatic transportation, candling, and grading. The supporting facilities for farm egg processing include egg washing machines, egg suction devices, egg printers, egg packing machines, and so on. Taizy egg grading machines are widely applied for sorting chicken eggs, duck eggs, goose eggs, preserved eggs, quail eggs, etc.

What is an egg grading machine?

The commercial egg grader machine is a weighing-type egg processing equipment. The grading machine automatically sends the eggs to different collection boxes for grading according to the weight or size of the eggs. In addition to the function of grading, the egg grading machine also has the function of light inspection, which can detect embryonic eggs, eggs with cracks, and eggs with uneven color. At present, there are two main types of egg graders developed by Taizy.

What are the functions of the egg grader?

The machine is equipped with an egg-sucking device that can assist in fast-loading eggs for grading. Manual hand-held suction cups will suck up the eggs from the egg tray. It can load 30 eggs each time, which can save labor.

The automatic egg conveyor can quickly transport eggs into the egg grader for grading. The machine transports smoothly without causing damage to the eggs. The egg conveyor’s silicone rollers with guide bars ensure that the eggs move at a constant speed in the guide rails.

The color touch-screen PLC electronic grading machine of the egg grading machine has a self-diagnosis function, which can intelligently count the number of eggs sorted at each level in each class, and the grading accuracy is ±1 gram. The text on the touch screen can choose different languages, such as English, Chinese, French, etc.

The egg collector can adjust the order of the graded eggs, and then drop the corresponding eggs into special egg nests. The eggs are then manually loaded into the egg tray using the egg suction device.

The egg grading machine has a wide range of uses and can be used in farms of various sizes, such as chicken farms, duck farms, goose farms, etc. In addition, the egg grader is also used in egg-deep processing factories and large supermarkets to grade eggs. Some poultry hatcheries also choose egg graders to pre-treat eggs. Finally, egg graders are also commonly used in various food processing factories, especially egg food factories. In order to ensure the consistent weight of eggs, graders are often selected for processing.

This small egg grader is often used in households and small farms to quickly grade eggs, duck eggs, goose eggs, etc. The egg grading equipment is popular in the market because of its small size, low cost, and high processing efficiency. It is often exported to the Philippines, India, Australia, the United States, Pakistan, Kenya, Romania, and other countries. The small-scale egg grading machine has the functions of light inspection, automatic weighing, and automatic grading, and the processing capacity is about 3500-4000 pieces per hour.

This automatic egg grading equipment is more suitable for large poultry factories because of its higher output. The output of this grader can exceed 5,000 eggs per hour, which is very suitable for users with a large amount of egg processing. At present, this large-scale egg sorting machine is widely exported to South Africa, Sudan, Nigeria, Turkey, Spain, the UK, Canada, Argentina, etc. This egg grader can classify eggs into 5 grades. In addition, the automatic grading machine is often used with an automatic egg loading device, egg washer, egg printer, and egg packaging machine.

How to grade eggs with the egg sorting machine?

2. Candling: The candling device is equipped in the middle of the conveyor belt. The light inspection device irradiates the eggs, so it can pick out unqualified eggs such as cracks, yellowing, and deformities.

3. Grading: The eggs enter the grading area through the conveyor belt. The grading area uses a mechanical weighing system to grade eggs of different weights.

4. Collecting eggs: The graded eggs are dropped on the grading board, and the eggs of different grades are collected manually.

How to choose a good egg grader machine?

The commercial egg grading machine sold to the Philippines

Why do eggs need to be coded with an egg coder machine?

Why is the egg grading machine popular in Malaysia?