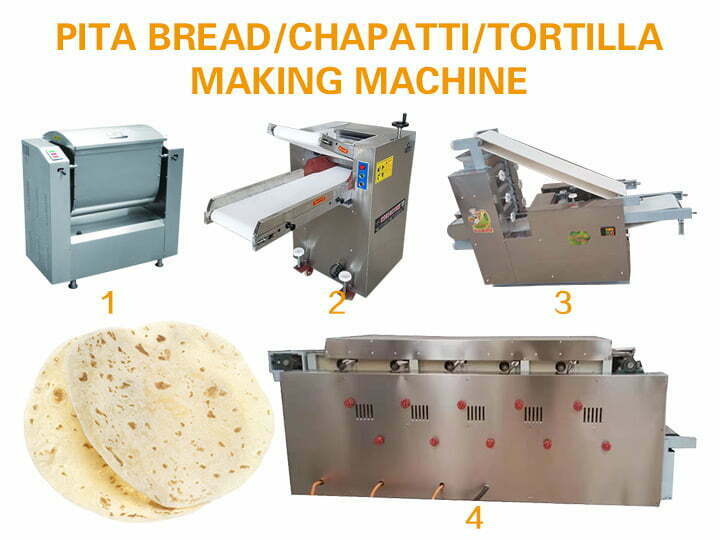 Arabic bread (Lebanese bread) is the famous pita bread, which is a round pancake made from wheat dough. It has a soft taste and can be used for dipping sauces, spreading sauces, and stuffing.

The dough pressing machine is composed of a horizontal conveyor belt and a pressure roller. Put the dough at the entrance of the machine, the roller will squeeze the dough, then the squeezed dough falls on the conveyor belt. Repeating the above steps, you will get more chewy dough and get a better taste of pita bread.

The bread making machine is a machine for making round Arabic pita bread. It has the characteristics of automatic pressing and cutting. The mold size and shapes can be customized. Therefore, you can make different sizes and shapes of pita bread by changing the mold.

The oven is the most critical step in pita bread production. Pita bread is usually baked at high temperatures, and the water evaporates quickly under the action of high temperature. The dough expands like a balloon and is divided into two layers. This pita bread oven is generally used with the tortilla maker machine to form an automatic line. The machine has single-layer and double-layer models, and the heating methods include electric heating and gas heating.

Why is the chapatti maker machine worth investing in?

The production line can produce more than 2,000pcs of bread in one hour. So you can sell this bread through retail or distribute it to wholesalers. Therefore, it has good economic benefits.

In February, we received an inquiry about the pita bread production line from a customer in Guam. He wants to make 13cm pita bread with 1500pcs/h capacity. According to his production requirements, we recommended our chapatti making machine and the smallest pita bread oven to him. After comparing the machine details and the quotation, he chose to order an oven from us.

And the requirement for oven voltage is 220v 3, and the heating method is gas heating. After receiving the deposit, we manufactured the oven for him at once. During this time, he ordered a pita bread making machine and dough mixer from us again. And in order to match the oven width and his production output. We made him a bread maker with a 13cm*2 mold. This means that the machine has two molds, and it can bake two pieces of bread at a time when baking pita bread.